Shoebill stork Facts : All you need to know about the amazing Shoebill birds!

The shoebill stork is a large and fairly unattractive dinosaur-like bird that can be found in Uganda. You’ll discover top interesting facts about shoebill storks in this article, including their nutrition, population, sibling behavior, noises, longevity, foot size, and more.
Shoebill (Balaeniceps rex) is the name given to this gigantic grey waterbird, sometimes known as a whale-headed stork, because of its gigantic bill, which resembles a classic Dutch clog and has a pointed nail-like hook on the end.

It was formerly categorized among storks in the order Ciconiiformes, but DNA tests have revealed that it belongs in the order Pelicaniformes with pelicans. Whatever its taxonomic relationships, this secretive swamp dweller remains one of Africa’s most sought-after ticks for birders, with the marshes of Uganda and Zambia’s Bangweulu area providing the highest chance of seeing.

The wide wings of a shoebill may reach up to 2.5 meters from tip to tip. It has one of the slowest flapping rates of any bird, with about 150 flaps per minute.
Shoebills are lungfish-specific predators. Their spread through tropical East Africa seems to be linked to the abundance of these fish – as well as papyrus reed beds, which are their preferred nesting environment.

Living around hippos is beneficial to a shoebill. These massive amphibious creatures bulldoze pathways across papyrus swamps, giving shoebills access to feeding sites that would otherwise be unavailable. Fish are also pushed to the surface, making it simpler for the bird to catch them.
Shoebills eat a range of food, including frogs, snails, water snakes, turtles, waterbirds, and infant crocodiles, in addition to fish. Shoebills have even been seen eating on a young lechwe antelope, according to unsubstantiated reports.

A shoebill bird may lay two or more eggs, but it seldom raises more than one youngster. Stronger sisters will harass their weaker sisters, depriving them of food and, in extreme cases, murdering them. Eagles are also subjected to this barbaric treatment. The younger girls serve as backups in the event that the oldest dies.1

Young Shoebill will assault Each Other: Young shoebills will fight between themselves. Shoebill storks are considered to be timid birds that like to be alone. They have territorial tendencies as well. When many shoebills are born in the same nest, they will vie for the mother’s attention.

Shobills ranging in age from two months to one year battle with one another, according to scientists and researchers who have had limited experiences with the species. The dominant, bigger offspring will battle their siblings. The bigger bird often drives the smaller birds to leave the nest and survive on their own.

Shoebills are fearless, even when it comes to crocodiles. Living in the marsh is quite dangerous. Disease is common, predators abound, and food may be sparse. 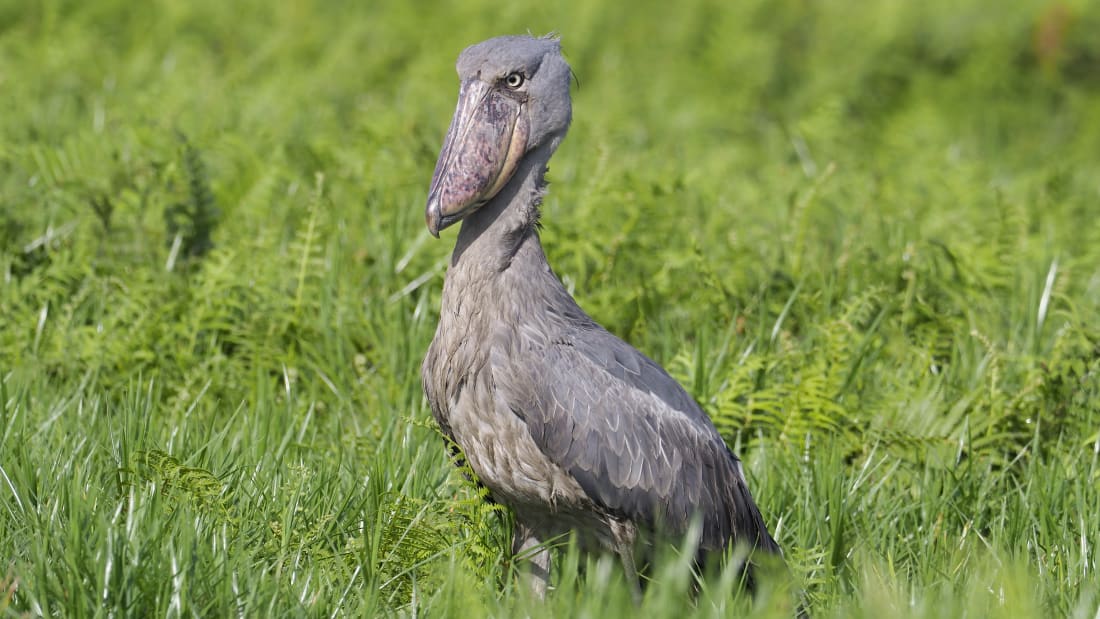 The shoebill stork will not accept a negative response! The species is a fighter. They battle both little and huge creatures. If a weak animal crosses their route, the stork will rush from its hiding position to catch it and eat it.

Shoebills are very patient birds. Shoebill storks are patience masters. They will spend hours standing in water, big stretches of grass, and other hiding areas. Shoebills dine at night and remain absolutely motionless to blend in with the darkness.
They understand that if they wait long enough, they will be able to locate their next food.

The shoebill will rush from concealment and attack the victim when the time is perfect. They leap forward, picking up the critter with their keen beak and swallowing it whole.

Eels, catfish, snakes, and lungfish are among their favorite foods. They will devour anything that is tiny enough to fit into their mouth.

Shoebill storks don’t make a lot of noise, but when they do, they’re loud! Staying quiet is an important part of being sneaky and waiting for the proper time. The shoebill stork is well aware of this. As a result, it will never make a sound when seeking for prey.

When it’s time to mate, the shoebill will make a loud call to attract a mate. Their screech like that of a machine pistol. It sounds like a sequence of terrible popping noises. Potential partners will flock to the raucous shoebill because they like the sound.

Their feet may reach a length of up to 18 centimeters. The big feet of the shoebill stork! A shoebill’s foot may measure up to 18 cm in length. That’s about half the length of a bowling pin! A human foot is 23 cm long on average.

The Beak Is Designed to Look Like a Shoe: Their beak is what gives them the name “Shoebill Storks.” They consume tiny animals and fish in one swallow with their large, shoe-shaped mouth. The beak’s tip curls down to create a hook. To aid in digesting, they employ this sharp curvature to puncture through the bodies of their food.

There is so much more to learn about Shoebill and the best way to do so is by planning a safari visit to see them in Uganda.